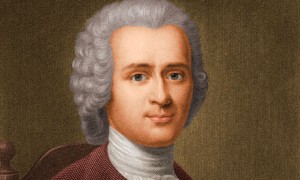 Rousseau’s Works
Rousseau did many odd jobs until he wrote his first major philosophical work in 1750. He wrote his first work, Discourse on the Arts and Sciences as a response to an essay contest at the nearby Academy of Dijon. In this work, Rousseau argued that the progression of the sciences and arts had caused the corruption of virtue and morality. It was widely read and considered very controversial, but nevertheless, he won first prize in the contest for it. This discourse won him much fame and recognition.

In 1753, the Academy of Dijon had another essay contest. Rousseau again entered a philosophical work, this time called The Discourse on the Origin of Inequality among Men. This work was also widely read and considered controversial; however, he did not win the contest because the judges thought it was too long. In this work, Rousseau argued that human beings are basically good by nature, but were corrupted by complex events that resulted in then-present day society.